Contrary to what you may have been told or read on social media, Amherstburg Council did not vote on Monday night to remove Russell Renaud Hill from the northern end of Centennial Park. Nor did we vote to sell any parkland, rezone any parkland or proceed with development of any parkland.

We voted to have Administration proceed with public consultation on the highest and best use of the lands remaining at Centennial Park and Jack Purdie Park in accordance with the Town’s Official Plan for Housing First Policy. Rather than discuss these vital issues about these valuable properties behind closed doors, we voted to discuss them in the open and fully engage and seek input from the residents of Amherstburg. 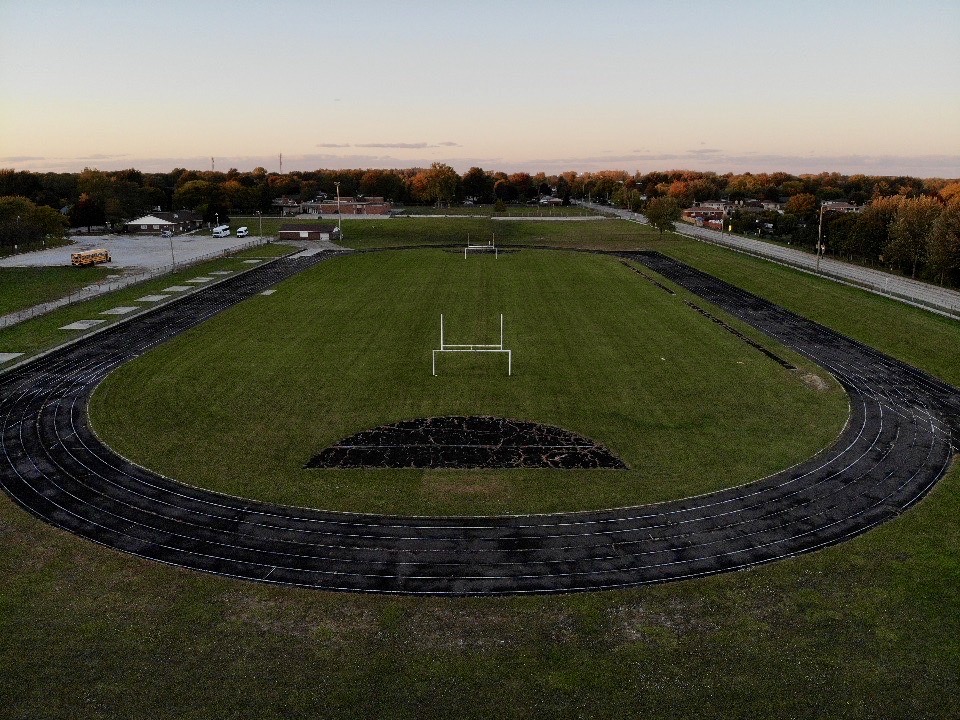 What we decide to do with what remains of Centennial Park, the Libro Centre and Jack Purdie Park will define our community for decades to come. I think it only makes sense to examine all of our options and assess the pros and cons of each. We need to engage in an open and honest community discussion based on facts, not falsehoods, that revolves around varying opinions and perspectives, not personal attacks. 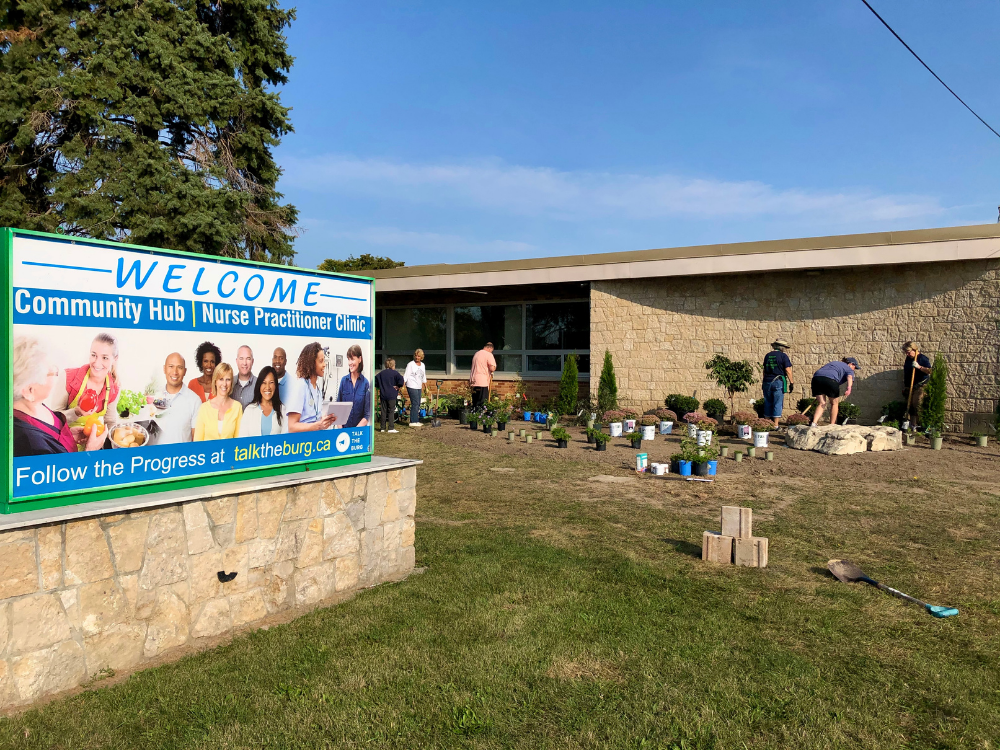 I think the discussion has to consider our housing crisis, our ongoing financial challenges, the cost of replacing our lost recreational amenities, and all the good being accomplished by the community hub at St. Bernard's, which is now home to a nurse practitioner's clinic that can service some 2,400 patients and Amherstburg Community Services, which provides vital services to our most vulnerable residents. As well, the hub will also be home to The House Youth Centre, the Verdi Club, the Fighting Island Boxing Club and will feature a drop-in space for our senior population.

The hub has space to house other social service agencies and already provides some exterior storage space for the Amherstburg Fort Malden Horticultural Society, which has planted a Signature Garden out front with more than 300 perennials with the support of the Amherstburg Community Foundation.

The Town has already conditionally sold the eastern portion of the St. Bernard's property for the development of a long-term care home that could create as many as 80 full-time direct jobs, 205 spinoff jobs and annual property taxes in the neighbourhood of $300,000. The sale is conditional on the buyer obtaining the necessary approvals and provincial licensing to operate a 128-160 bed facility.

Here are some of my preliminary thoughts on these issues. Again, nothing has been decided and Council will expressly seek public input before deciding on anything:

I love that hill.

I took my daughter tobogganing there when she was younger and we went sledding there again this winter. I run up and down it during the summer and spring and I trudged through the snow to the summit last weekend and saw first hand the families who were using it and heard first hand the children squeal with delight. It’s not a particularly big hill but it’s wide enough to accommodate many users at the same time and it offers quick, fast slides and a quick and manageable trek to the top. 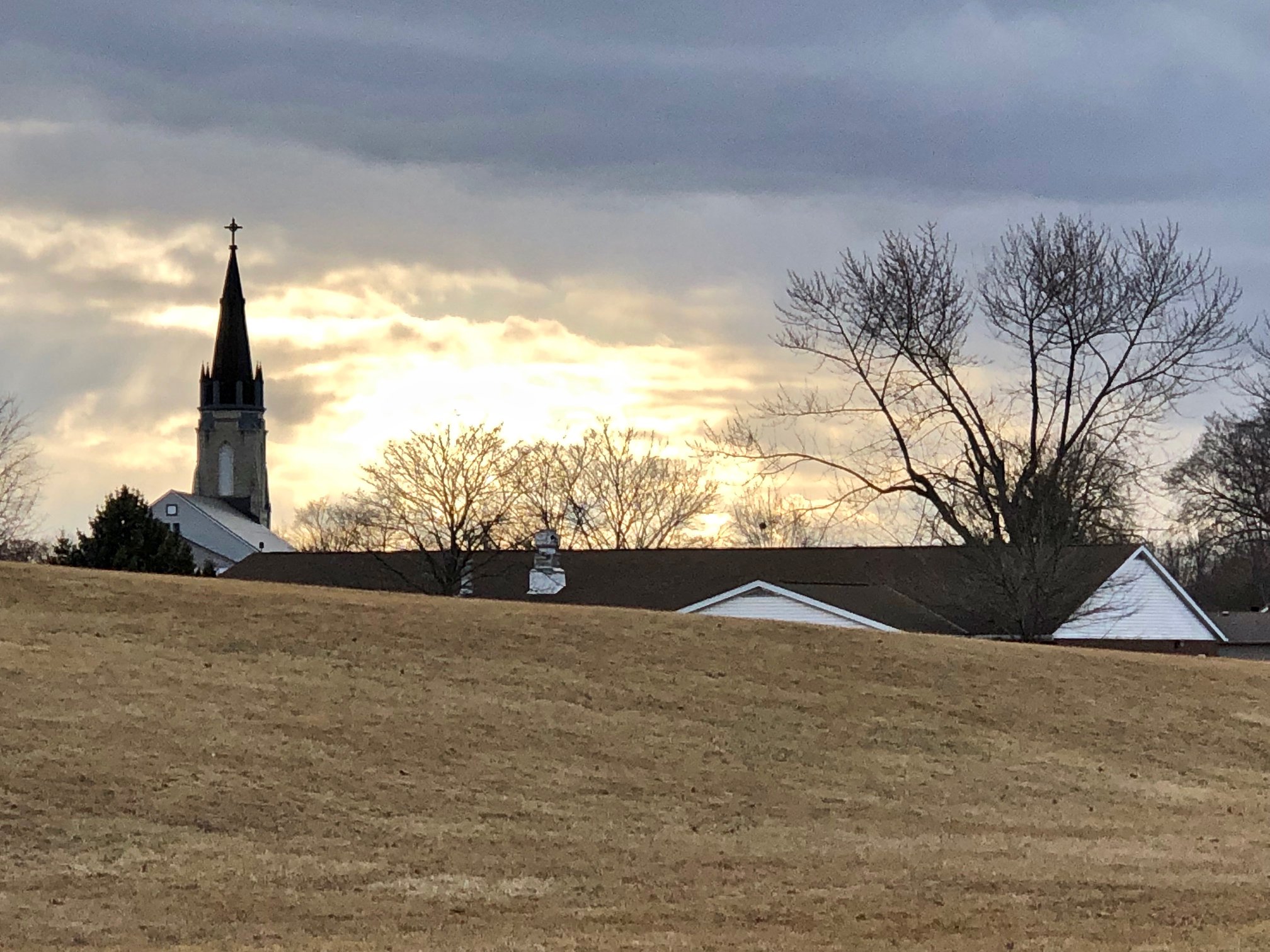 One of my favourite views in all of Amherstburg – and there are a boatload of them – is the vantage point from Richmond and Fryer Streets, where you can see the spire of St. John the Baptist rising above the hill with a dusky orange or pink sky as the backdrop. I understand the emotional attachment people have to that hill and the community should be forever grateful to Russell Renaud for having the vision to see the possibility of a hill where none existed before.

Could development take place without impacting the hill that generates funds for amenities like a pool and track, creates high-density housing that broadens our tax base and addresses our housing crisis and creates a linear park with some amenities that residents use 365 days a year, with a trail connecting the community hub to a new track at the High School? I don’t know, I’m not a planner or an engineer, but I think it’s a question worth exploring. That’s why I voted to have Administration come up with a vision we could then take to the residents of Amherstburg. 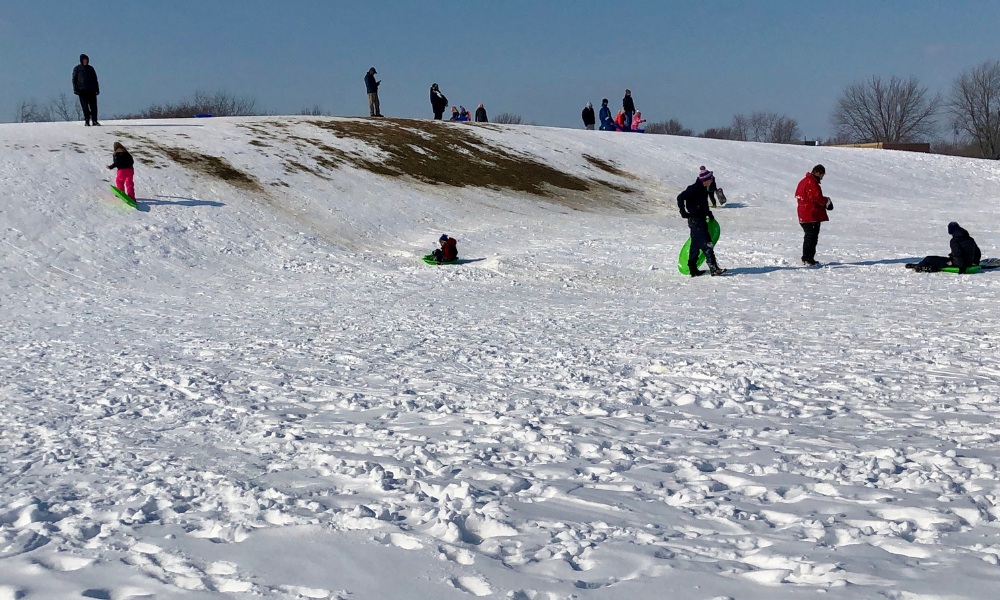 That’s why I voted the way I did on Jack Purdie Park as well. The park is sprawling and vastly underutilized. Council recently received a report that said the playground equipment would soon have to be ripped out of the ground and that no money had been earmarked to replace it. Could development take place on a portion of that 11-acre park that addresses our housing crisis, creates a linear park with trails and generates funds that could be spent on a brand new playground and other amenities? Again, I’m not a planner or an engineer and I don’t know. But I think it’s a question worth exploring and taking to the residents of Amherstburg.

In both instances, and with all the facts and options on the table, a majority of residents might well support funding an athletic park at Centennial or oppose any sort of development on either property and the will of Amherstburg residents needs to be respected. But those facts and options aren’t on the table yet and it’s tough to have a real discussion until they are. 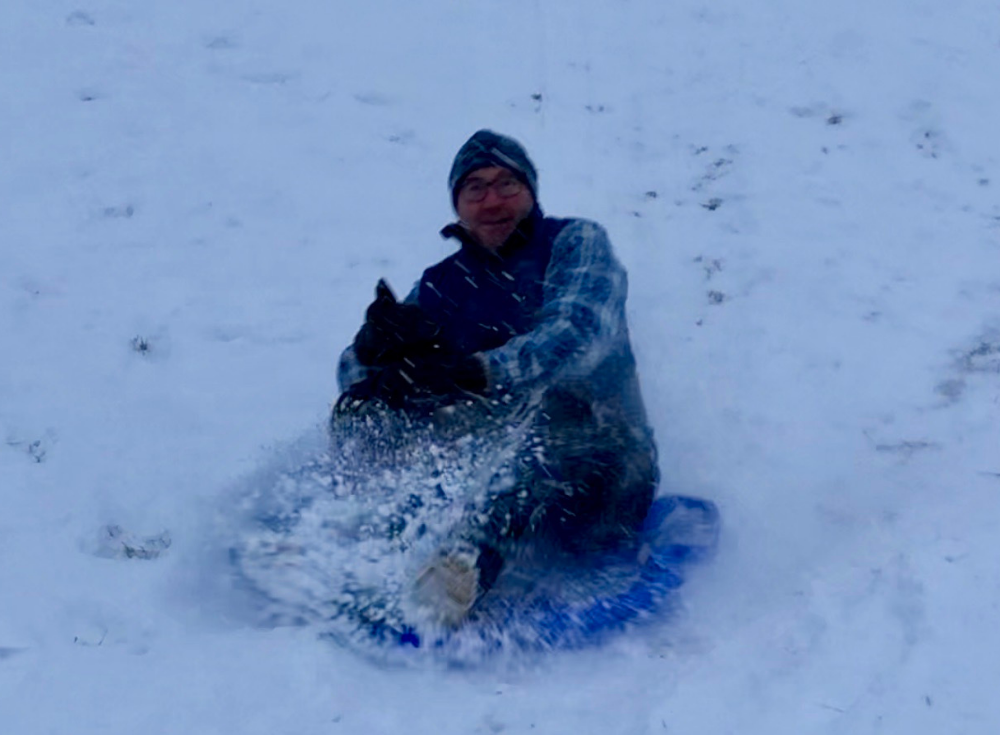 The reality is the Town needs money for recreational amenities like a pool and a track, let alone all of our parks and playgrounds and the other amenities at Centennial Park that were allowed to deteriorate and that were ultimately displaced to make way for the new High School.

One of the ways the Town can generate revenue while boosting its property tax base and lowering annual operating costs, is to sell surplus land, especially when the real estate market is booming.

The 2014 Deloitte report said the Town could consider the sale of non-core assets to improve its financial situation, which is characterized by a massive infrastructure deficit and significantly less in reserves than comparator municipalities. And we certainly have surplus parkland that is vastly underutilized and definitely more park than we can afford to pay for.

That’s why I support exploring our options when it comes to maximizing the value and usage of our parks to ensure we have the money to maintain them and ultimately replace them. I think the Town also needs to explore, in consultation with residents, the potential of selling portions of the Belle Vue property and the sprawling Libro property as a mechanism for funding park improvements, replacing our lost recreational amenities and addressing our housing crisis.

I believe very strongly that central Amherstburg needs a track. I’ve been pressing this point since the public school board told us they had designated space for a track on the property they purchased from the Town, but that they had no plans and no money to build one. Not having a track is unacceptable to me and I remain hopeful community fundraising can get us a track and a football field, which is what happened during the recent construction of Leamington District High School.

It is important to note that the Parks Master Plan approved by the previous Council makes no provisions for a new track even though it was known then that the track had reached the end of its useful life and was being decommissioned because of the school project. The Parks Master Plan recommended against the Town replacing the track and instead called on “local schools to provide an appropriate level of support to their athletic curriculum.” As it stands right now, about a third of that dilapidated track is behind a fence and on school-board property.  You can no longer do laps unless you want to trespass and scale a fence.

Councillor Pat Simone and I lobbied provincial officials for funding for the track and other recreational amenities during the summer AMO conference. I made a motion for Council to send a letter to Ontario Premier Doug Ford about funding issues with the new High School and I penned my own letter to the premier.

My Council colleagues and I supported a motion to engage the school board about a track partnership and I further made a motion asking the Town to see if there were corporate sponsors willing to step up and help this community build a track, just like was done in Leamington. I also made a motion to have Administration put back up the S. Ralph McCurdy sign while the track was still in use because I believe it is important to honour the legacy of our community builders.

I love that track. I cycled and ran around that track multiple times over the spring and summer and it even formed a perfect oval for the final Ho in the “Ho Ho Ho” design I created for Christmas by running a specific route using my Strava app. And people were always using that track, whether they were running or strolling or walking their dogs. No one was playing tennis or basketball on the courts the Town let fall into disrepair, but the track was still frequently used, despite cracks and holes and its deteriorating condition. 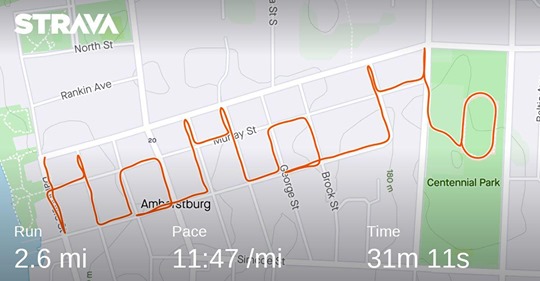 Not only has that track reached the end of its useful life, but Administration told us in a report Monday night that the track couldn’t simply be shifted to the North because it would cut into the hill. Amenities were spread across 15 acres of the southern portion of Centennial Park and there are only 12 on the northern portion, including the hill and the former ACS building, which total at least four acres. You can read the report here.

That’s why I think it makes the most sense to rally together as a community and raise funds for a football field and track on lands the school board has designated for that purpose. That’s what happened in Leamington and it was fundraising that helped Amherstburg construct the S. Ralph McCurdy Track and Field Complex and the Lions Pool in the first place.

I also believe our Town needs a pool for the kids and that selling surplus land, whether it’s at the Libro or Belle Vue or Centennial or Purdie Parks, might help us raise the necessary funds.

Here are some stories about the fundraising campaign undertaken in Leamington that resulted in a state-of-the-art football field and track: