When Molly Allaire heard Council had asked Town staff to come up with different options for Jack Purdie Park, including the potential to develop a portion of it, she bought some magic markers from the Dollar Store and set to work making 150 signs that are now springing up like tulips on front lawns throughout the Monopoly subdivision. 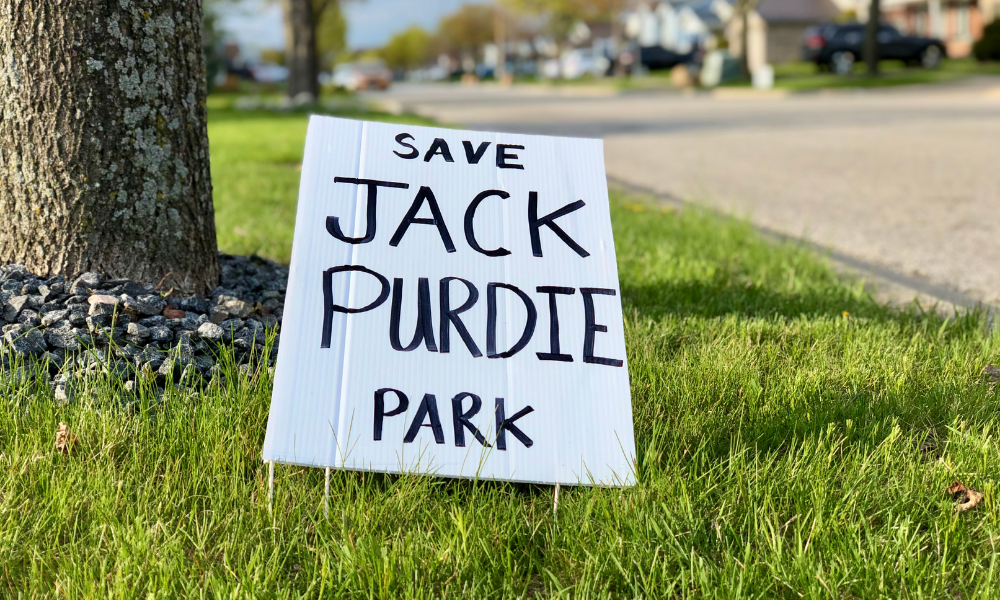 “We love this park. That’s why we moved here,” said Molly, a mother of three young boys, including a 9-year-old who plays in the park pretty much every day. “It’s an icon. We’ve played there forever and we don’t want to lose it.”

Molly used black marker for her makeshift signs, modelled after some colorful signs that had popped up in the area with slogans like “Save Jack Purdie Park” and “The Monopoly Needs Greenspace.” Her neighbours scooped them up as fast as she could make them. She could have made more, she says, but the pandemic disrupted her supply of white cardboard.

The signs went up in response to a Council vote in February to proceed with public consultation on the potential of developing a small portion of the park for affordable housing and using the proceeds to invest in and improve the parkland that remained. I voted in favour of that motion to envision different concepts for the park and also for the motion to similarly explore all options when it came to the north end of Centennial Park. I wrote more about it here. 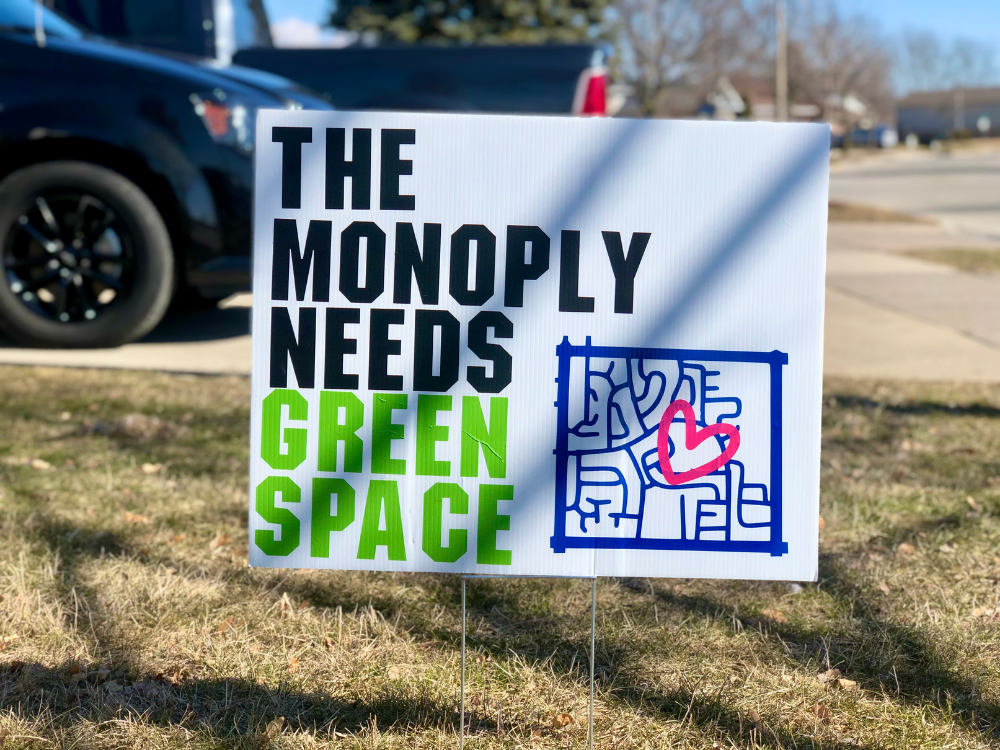 I’ve spent some time thinking about and exploring Jack Purdie Park since then, running through it and around it on the weekends, and I understand why residents value it so dearly. There are always bikes on kickstands and kids on the swings and playground equipment. On nicer days this spring, groups spread out and and lounged on the grass. Dog walkers are a common sight.

In many ways, it was a park ahead of its time in that it connects so many different streets, allowing residents to access it from all sides. But it has never lived up to its potential, as ideas for baseball diamonds and tennis courts never materialized. Now, the cracking trail system is in need of sprucing up and there’s well-used playground equipment in urgent need of replacement and acres of greenspace.

There was a petition for a time attached to the Jack Purdie Park sign fronting Richmond Street and there is also an online petition that has more than 1,300 signatures. For a while this winter, the council report on the issue was nestled in the branches of  a tree, along with a message imploring residents to send an email. Molly was among the many passionate residents who did. 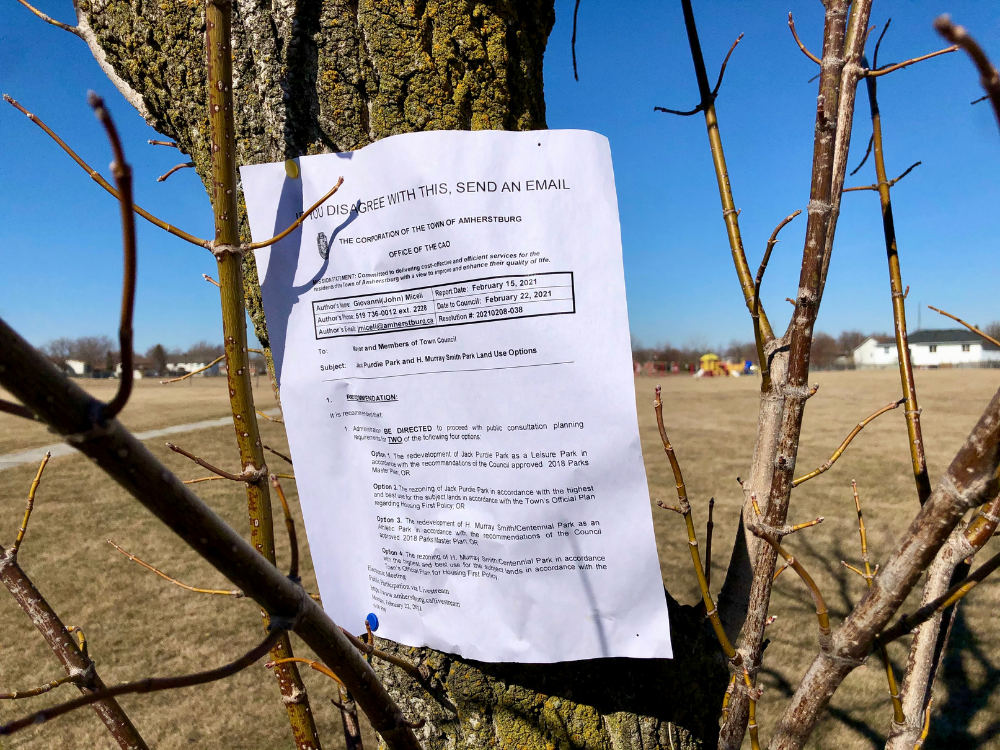 The residents wrote about their love for that park and the need for greenspace as well as their disappointment that the Town had failed to sufficiently invest in the park.

Molly and her husband organize Ultimate Frisbee at the Libro and she thinks a disc golf course, similar to the one we built at Beaudoin Park in River Canard, would work great at Purdie. She would also like to see a skatepark or a basketball court and tennis courts, pointing out the amenities that have been displaced in Centennial Park. Many residents had similar ideas and many talked about the potential for a small dog park. 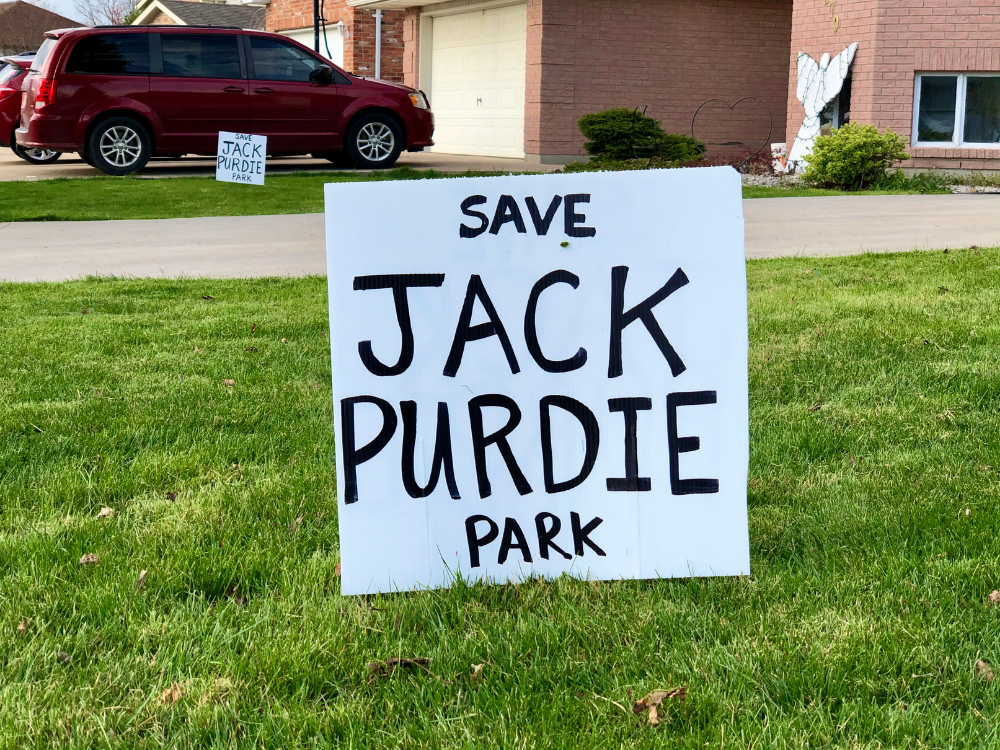 I’ve been moved by all the emails and calls I’ve received about Jack Purdie Park and I’m looking forward to more public input when Administration unveils some different concepts for that park, as well as the north end of Centennial Park, later this month or in early May.

It is my expectation there will be a variety of concepts on which the public can provide input, from the land remaining totally parkland to developing a portion of the land for affordable housing and using the proceeds to invest in the parkland that remains. I've heard from many residents already and I hope to hear from many more.

We can’t have tennis courts, ball diamonds and skateparks in every park given our scarce resources, and I still believe we need to replace the pool and the track, so it’s important that Purdie and Centennial complement each other, not to mention the Libro Centre, so we can maximize the benefit of each for all of Amherstburg. 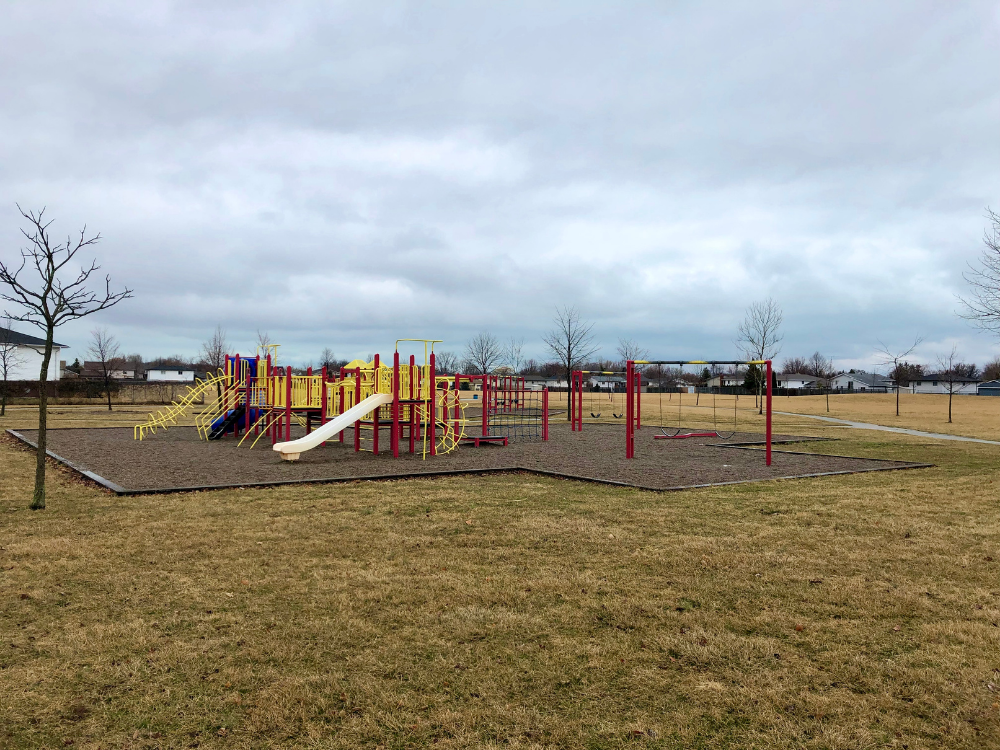