Amherstburg's Reserves: A Work In Progress

Reserves in Amherstburg are a somewhat controversial issue.

Administration tells us that our rainy-day funds are woefully short compared to our neighbouring municipalities. They also tell us we have more infrastructure per capita than any other Essex County municipality, which means the highest burden in terms of maintaining and ultimately replacing it.

Critics of reserves tell us we’ve taken money from them and socked it away instead of investing in tangible improvements now. They also tell us it isn’t their fault the Town’s reserves are so low and that it isn’t fair to punish them for the sins of those who came before.

That’s why I think it’s so important that everything we do with our reserves be transparent and accessible, which means easy to understand as well as easy to find. I recently asked administration to create a Reserves information page on the Town’s website and I’ve also decided to create one on my website.

It's important to remember that reserves can fluctuate so the information below is just a point-in-time snapshot. Ideally, Administration could provide a detailed picture of our reserves every quarter as recommended in the 2014 Deloitte Report: “Management should create detailed reporting for Council that outlines the reserve and reserve fund balances on a quarterly basis, including all transfers that have been made.”

Below are figures the Treasurer provided to Council in December. It shows 2018 reserves, including development charges, and the amount of reserves per resident in each local municipality. The Essex County per capita average was $1,628 compared to just $755.87 for Amherstburg, a difference of $872.88.

Below is the Reserve Budget that Administration, to its credit, included for the first time in the 2020 Budget.

The graphic below has not been updated to reflect the 2019 Year End surplus and reserve transfers authorized by Council at our meeting on July 13. These transfers include: 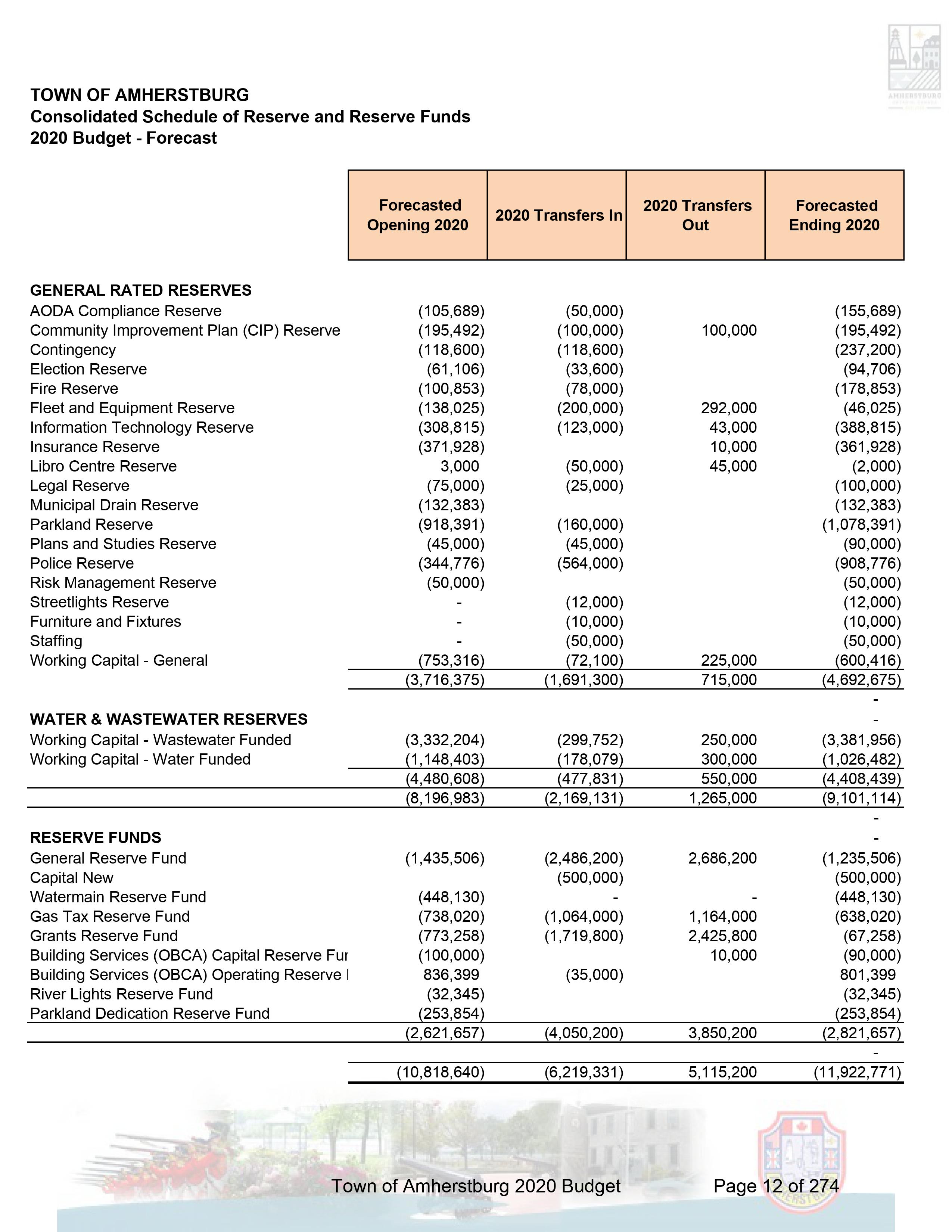 A Service Delivery Review conducted by StrategyCorp concluded in its Phase 1 report that Amherstburg, compared to its peer municipalities, “contributes less to reserves on a per household basis.” It said "the Town will need to build its reserves to address its infrastructure backlog and to guard it against future economic shocks." Growing reserves, it said, was an "area of prioritization."

Below is a graphic included with a presentation StrategyCorp made to Council in July. Read the presentation!