In the end, and it took us a long time to get there, in the end we went with the boxy logo modified to include a buoy and the North Star while scrubbing the railway tracks.

I opted for that logo because I believed it could be part of a tool kit the tourism department can use to market the town and attract visitors and their disposable incomes. Of all the logos presented, I felt it best spoke of the history and heritage the town wants to promote.

I wasn’t blown away by any of the logos. They were all decent enough. No black and white but lots of grey. Desert island, forced to choose on aesthetics, I would have gone for the fancy A logo, with the sun and the three birds. I thought it was fun and fresh and lively. Residents opted for that one in surveys on Talk the 'Burg and my website. The sample sizes were small but those voices were real and reasonable.

But I couldn’t make my decision on the logo in isolation. I had to consider the overriding goal of the rebranding exercise, which was to market the town as a history-rich tourism destination. The A logo was too similar to logos of other area municipalities and it was lacking in history or, at least, the potential to market history. So I went with the modified original logo.

The consultant, Cinnamon Toast Media, wondered what they would do with the space created by the missing railway tracks, referred to by multiple people as a “hashtag.”

Maybe they’ll make bigger the house, which is representative of the Amherstburg Freedom Museum. Or maybe they’ll squeeze in one of those cannons we have all over town. I’m good with whatever they decide on. It’s time to move on, it's time to get going.

The consultant told us it would be difficult to achieve the project’s other deliverables if we didn’t choose a logo. Those deliverables include a marketing plan and a tourism website located at visitamherstburg.ca.

Photographs already taken by a local photographer will be featured on that site. And you just know it is going to look stunning. High-resolution pix of this town and its shoreline vistas and historic sites? How can it not be stunning?

Some residents were urging myself and the other councillors to reject the logos outright and send Cinnamon Toast back to the drawing board or come up with a logo using alternate means. They were passionate and they believed that decision would be best for the town. I considered their arguments but ultimately voted to accept the modified logo because I wanted to advance the town’s tourism push. 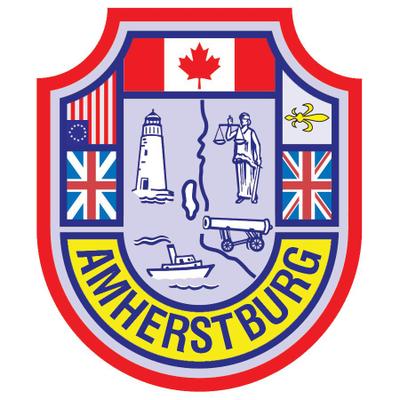 The fact we are keeping our crest, the one we’ve had since 1982, also factored into my decision to go with the modified logo. The new logo is for the tourism website and tourism-related social media channels, which are already engaging and boast significant followings. We will still have the town’s official website. We will still use the crest. We won’t peel it off our cars.

I made the motion for the tagline council passed: Every Day History, which was a play off of Everyday History. I mentioned putting periods between the words during the meeting and Ron from the River Town Times marked it down as Every. Day. History. That works, too. Councillors Michael Prue and Leo Meloche wondered aloud about History Everyday.

History Everyday actually sounded pretty good to me when this issue was running through my head tonight on my jog. Ditto for: Making History Since 1796 or Make History. Every Day. Lots of grey here, too, though I think a historical reference is important. I can live with what we've got but certainly wouldn’t object to hashing it out while Cinnamon Toast fiddles with the logo. But then we need to let the marketers and the tourism department do their thing.

Council invested in tourism in the 2019 budget, based on our past successes and the belief tourism is an economic generator that creates jobs, spin-off benefits and a sense of civic pride. Our Official Plan and Community Strategic Plan both highlight the need to market and promote the town as a tourism destination.

The Community Strategic Plan calls for supporting festivals and events linked “to the town’s heritage and identity.” It also calls for us to develop a marketing plan and a “strong online and social media presence.” The Official Plan, meanwhile, “recognizes the importance of tourism to growth in the local economy and in employment.”

We certainly didn’t get wholesale buy-in on the new logo, far from it, and it was a tough slog getting it across the goal line, but I’m certainly glad that we did. It was a passionate, healthy discussion and everyone was just trying to do right by the town.

The reality is that a logo and tagline are just one small piece of a bigger mosaic. Photos, positive stories, the snippets you and I share on social media, word of mouth and the way we run our festivals and events will do more than any logo to bring tourists to our town.

Hopefully, the end of the epic logo debate is the beginning of a sensational marketing campaign that will attract the sort of tourist traffic that creates jobs and market conditions favourable to a new hotel.