My council colleagues and I unanimously passed a Budget Friday afternoon that invests heavily in waterfront development, roads, parks and trails, one that addresses our financial challenges and strategic priorities, supports our invaluable heritage attributes and positions the Town for future growth and success. 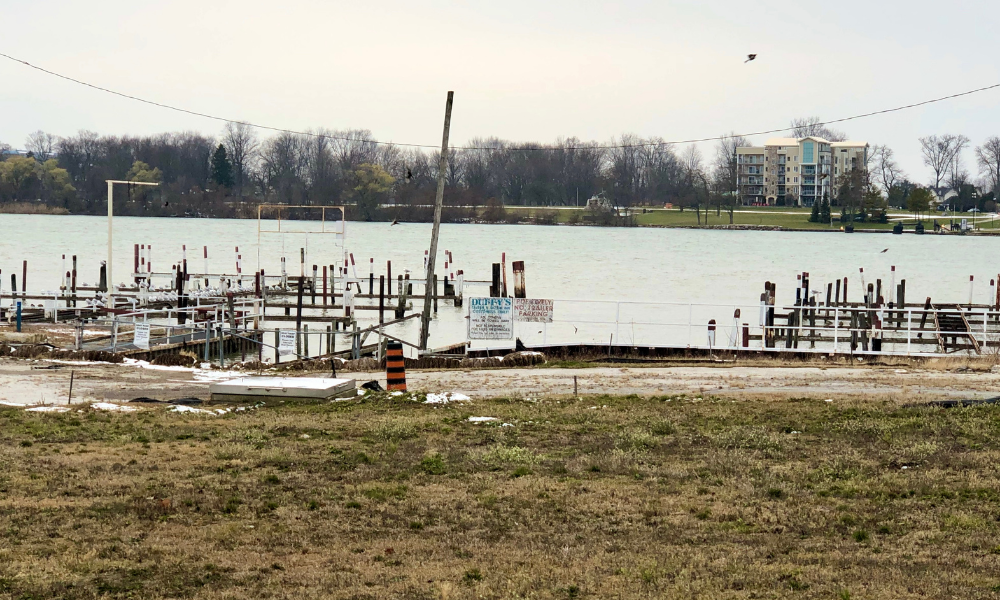 The 2021 Budget will invest $300,000 transforming the long-fenced off Duffy’s property into a bustling public space, an extension of the award-winning King’s Navy Yard Park that will feature paths, planters, benches and dockside mooring for canoes and kayaks and boats up to 20 horsepower and 16 feet. I believe this development will be a boon to the core, attracting residents and tourists alike who will patronize area eateries and shops, and that it will be key to the sustainability of any hotel. The sooner we can open it up to the public the better.

The Town’s first-ever dog park will be constructed at Ranta Memorial Park as part of an exciting $170,000 overhaul that includes an accessible kayak launch, an 800-metre walking trail, wildlife restoration areas and multiple fishing decks so anglers can try their luck in the Detroit River. The plan, funded entirely from a reserve dedicated exclusively for the sprawling north-end park, calls for a 0.6-acre space for large dogs, a .25-acre space for small dogs and a larger dog run stretching some 1.25 acres.

Trails will also be coming to the Golfview subdivision as part of a $900,000 project, funded from the Wastewater Budget Centre, to decommission the Edgewater lagoons. The plan will transform the lagoon cells into a “wetland and migratory bird destination” and “the intent will be to create pathways around the new wetland and create new pathways in the Golfview open space to tie into it.”

And while it isn’t part of the Budget, Council earlier this week approved accessing $263,621 in federal-provincial funding to build out a recreational trail that will wind around the rolling landscape of the Libro property and along Big Creek. As envisioned in the Great Spaces, Great Places proposal, the trail would include footpaths, footbridges and benches. It’s an incredible opportunity to enhance active transportation in Town and draw even more people to the jewel that is the Libro Centre. 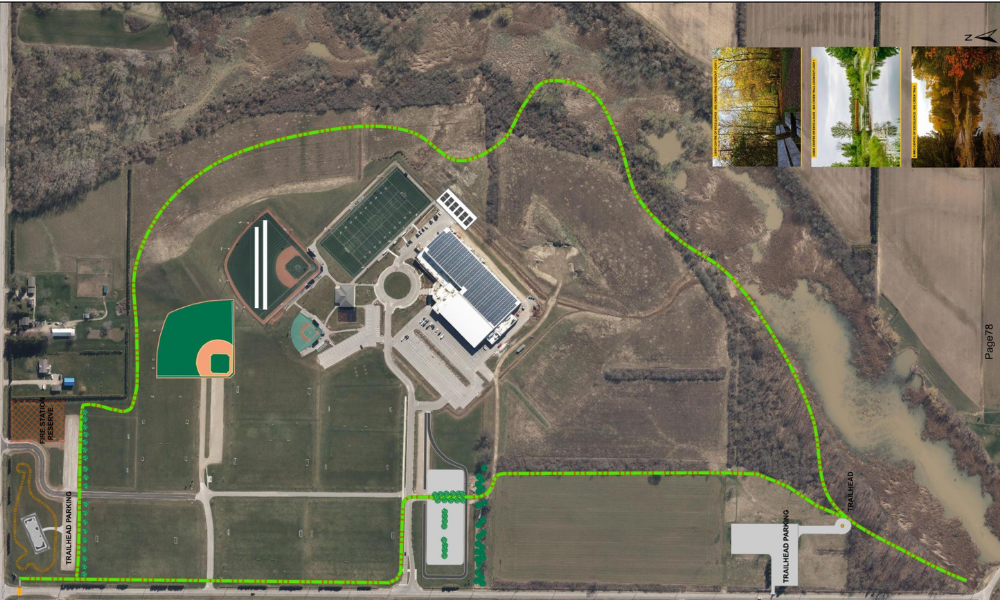 This Budget will invest $75,000 to construct the first of what is envisioned to be multiple baseball diamonds at the Libro and earmarks $75,000 to refurbish and relocate the skate park, setting it atop a fresh pad of smooth concrete beneath lights so the kids can skate, scoot and cycle in the evening. There is also $50,000 to upgrade the Splash Pad at Toddy Jones Park, $25,000 to refurbish the tennis and pickle ball facility at Malden Park and $75,000 for improvements to Warren Mickle Park.

The $10.6 million capital Budget contains no planned debt-funded projects and includes more than $3 million for roads, $865,000 for culverts and bridges and more than $1.25 million for a vital project that will finally see the installation of Supervisory Control and Data Acquisition (SCADA) at our water treatment plant and tower. We are currently the only plant in Ontario without SCADA automation, which will “provide up to the minute data” allowing “for accurate and safe operations.” 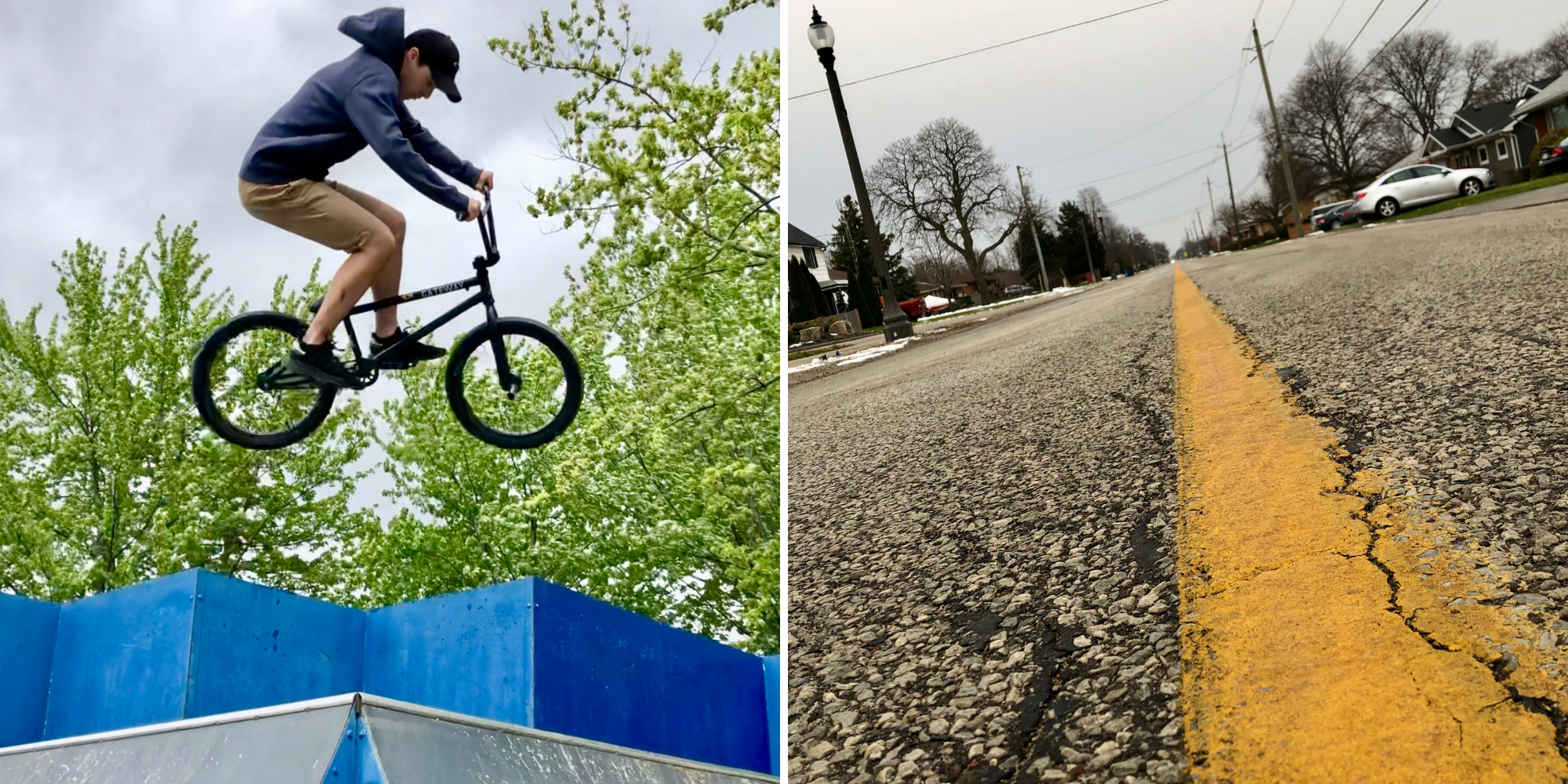 Road projects include $2.2 million for the reconstruction of Fryer Street from Richmond Street to Alma Street and $100,000 for engineering work to pave the way for the reconstruction of the 8th Concession between Middle Side Road and Alma. Contingent on provincial OCIF funding the Town will complete a mill and pave project targeting Ryan Street, Lamp Drive and David Crescent in River Canard and plow nearly $1 million into a reserve to fund future projects, to be determined by Council, to help address capital demands exceeding $81 million over the next five years.

Should the senior levels of government provide additional infrastructure funding to help promote post-pandemic growth and prosperity, and there is every reason to hope that will be a recovery strategy, the Town will be well positioned to put that money to good use addressing an infrastructure deficit greater than $181 million. There is certainly no shortage of potential projects.

Council responded to the concerns of parents about pedestrian safety in the Simcoe Street corridor in this Budget and will spend $75,000 installing a Pedestrian Crossover at the intersection of Victoria Street, close to the site of the new high school currently under construction. Earlier this year, Council lowered the speed limit to 40 km/h on Simcoe between Victoria and Pacific Avenue and that entire stretch will be designated a Community Safety Zone. 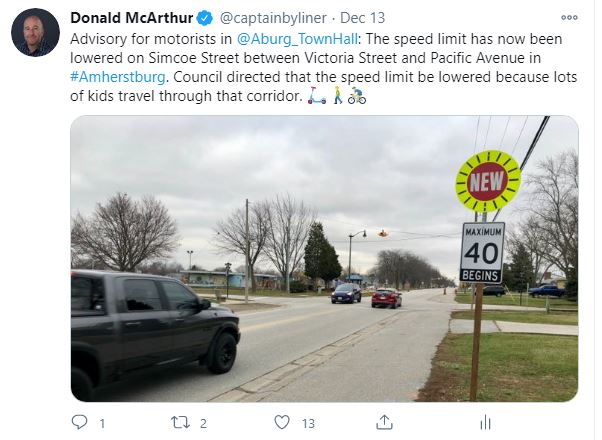 This Budget also provides for the purchase of a $460,000 grader to replace a 29-year-old model built way back when Nirvana topped the charts and Thelma and Louise were still in the theatres. It’s a big hit, no question, but this machine was expensive to repair, well beyond its life-cycle expectancy and will be put to use clearing snow in the winter. As well, this Budget invests $625,749 in Self-Contained Breathing Apparatus equipment to keep our firefighters safe and in compliance with legislation while they do their jobs.

The $46.5 million Operating Budget earmarks $50,000 for the continuation of the popular Open Air Weekends, which supported downtown businesses and built a buzz for the Town in the midst of this pandemic, drawing tourists and their disposable incomes from across the region. It also sets aside $50,000 for a two-year pilot project that would bring Transit Windsor service to Amherstburg. Council opted to delay the start of the pilot project because ridership has plummeted during the pandemic and we want to give this exciting Transit initiative the best chance of success. Transit doesn’t just provide transportation, it provides opportunities, especially for younger Amherstburg residents and our active aging population. 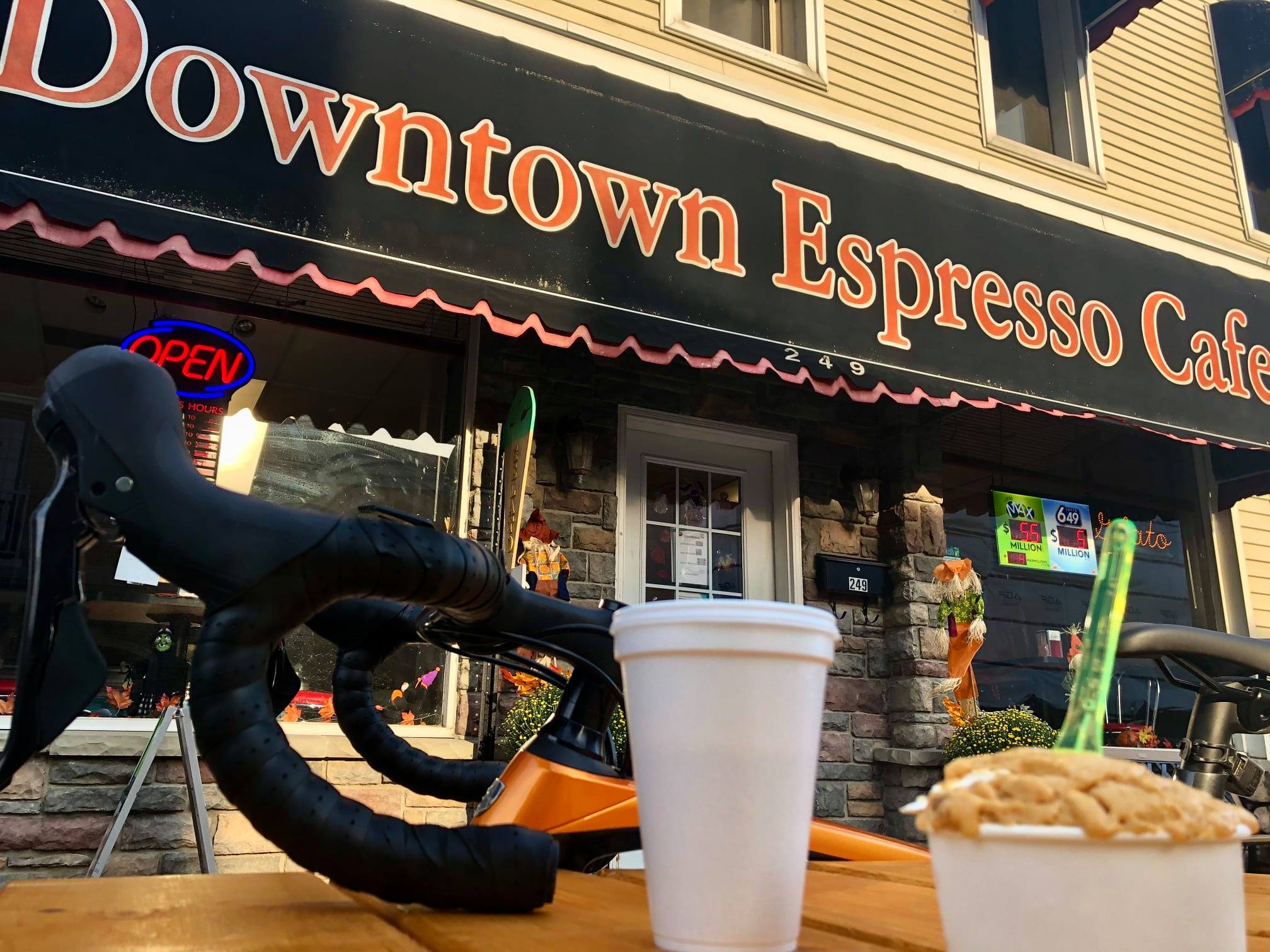 Council agreed to hire three new positions: A Town Solicitor, a Manager of Finance and a Heritage Planner. The hires were recommended in a Service Delivery Review conducted by consultants with expertise in municipal governance. The StrategyCorp report warned “the Town is not sufficiently resourced to meet legislated and Council mandates” and that “staff are working overtime resulting in burn-out and vacation carry over.” It concluded we had a lower proportion of full-time staff compared to peer municipalities by about 15 per cent and recommended the hiring of five new positions and making one existing part-time position a full-time one. Those five additions, the report said, would bring the Town up to the “average staffing level of its peers.”

These positions will shore up our financial operations, particularly as they relate to our Asset Management Plan, facilitate future growth, enhance strategic planning and operations throughout the corporation and ensure we continue leveraging our heritage and history as drivers of tourism and economic development.

This Budget also creates the foundation for future residential growth, which is a key strategic priority in terms of attracting commercial development and broadening our assessment base to alleviate the burden on existing residents. It invests more than $400,000 in the Southeast Quadrant Servicing initiative, some of which will be recouped by the developers and which is designed to open up for development lands along Lowes Side Road.

The StrategyCorp report warned the Town's "ability to sustain itself as a standalone, full-service municipality is at risk unless the municipality's population and assessment base grow" and recommended we target a 4.5 per cent increase in population over five years and a 3.5 per cent growth in assessment.

As the graphic below illustrates, outside of further development in Kingsbridge, the bulk of the Town's future residential growth is forecast to occur in the area of Lowes Side Road. 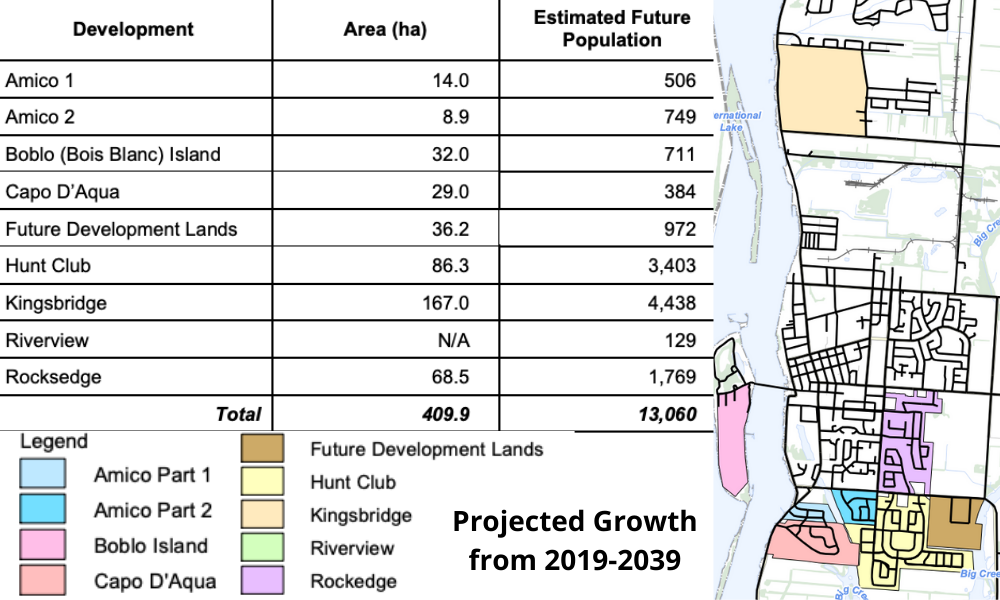